It all started a long time ago on a dry, mild spring day in 1989. On this day the land was tickled by a moderate wind from the South East. Many man would say it was a cold day, but because of the average mild wind it was still around 13°C.

It was on this day that the protagonist Joran Pronk was born. However, relatively little happened between 1989 and 2014, so we will not explain that part any further.

Joran Pronk has been the owner of Holiday Park Vlugtenburg since 2014. He was looking for a smarter solution for the coordination and facility management of this holiday park. Joran had ended up in a jungle of tasks, post-its, reports, phone calls, emails and malfunctions. As a result, there was no clear overview of whether tasks had already been performed, by whom, when and what the solution was.

Joran Pronk and Bas Brinkman have further developed an idea for the above problem and this was also the cradle of Keyplan, the digital facility manager.

Keyplan is a real-time solution with which the entire facility part of a holiday park can be coordinated and managed. This means that all tasks from housekeeping to landscaping, from the technical service to the activities of the reception can be coordinated via Keyplan.

In 2015 Keyplan was the winner of the best MKB idea in the Netherlands, a prize awarded by MKB Nederland and KPN. Media violence erupted immediately after the election. Keyplan was immediately allowed to sit down for live interviews, we ended up in news reports and newspapers. From that moment on, Keyplan’s ambition was to become the largest player in the industries in which we are currently active. 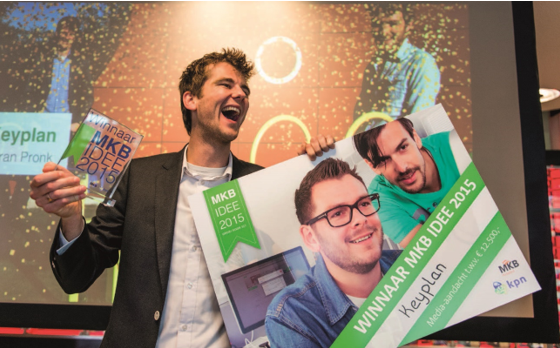 At the moment, in addition to the recreation sector, we are now also active in the hotel sector and we have links with various reservation systems. We are also active in the horticultural sector in collaboration with Royal Brinkman. Keyplan’s ambition is to become the largest player in the sectors where we are currently active in the short term.

Nowadays we have a team of (relatively) young, enthusiastic colleagues with whom we help the various sectors by implementing Keyplan.

Curious about what Keyplan can mean for your company? Then request a no-obligation Demo! We will contact you as soon as possible.